The moors and dales of Northumberland and Durham have rightly been referred to as ‘England’s last wilderness’, and guests on our holidays always agree that the area is a walkers' paradise. The foot soldiers who patrolled Hadrian’s Wall, the northernmost frontier of the Roman Empire, would no doubt have found the area rather less agreeable!

The landscape is a mixture of wide open grassland, heather covered moorland and lush green dales. Hadrian’s Wall marches across the hills taking in its stride a succession of craggy outcrops and undulating hills, each of which affords outstanding views across the surrounding countryside. 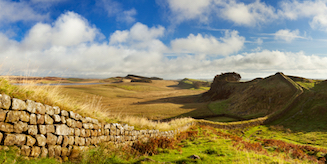 Hadrian’s Wall and the Roman forts and settlements associated with it are designated a World Heritage Site, whilst Hadrian’s Wall Path, which follows the Wall from coast to coast across the north of England, is a National Trail. Our walks will follow the very best sections of the route, where the Wall is at its most complete, and highlights will include Sewingshield Crags, Steel Rigg, Crag Lough, Cuddy’s Crags and the Roman forts and settlements of Vindolanda, Housteads, Corbridge, Chesters and Birdoswald. 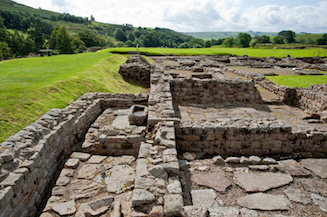 Hexham, our base for the tour, is an attractive market town, located just south of Hadrian's Wall. The town's crowning glory is its ancient abbey. The present building dates from the 12th century, but a church has stood on the site since the 7th century, and Hexham has been a place of pilgrimage since the earliest days of Christianity in England. At the heart of the town there is The Sele, a leafy area of parkland which once formed part of the abbey grounds but is now open to the public who can enjoy the broad grassy walks and beautiful trees.

Your holiday in Hadrian's Wall Country will be based at a comfortable family-run guest house in the attractive market town of Hexham. Your room will have ensuite bathroom facilities and you will have a choice of continental or full English breakfast. Hexham has a wide range of inns and restaurants serving meals in the evening.

Your holiday in Hadrian's Wall Country will be based at the Beaumont Hotel [AA***] in Hexham. The hotel occupies a handsome stone-built town house with views of Hexham Abbey and overlooking The Sele, the leafy public park in the centre of the town. The Beaumont Hotel offers a warm welcome, and well-appointed bedrooms with ensuite bathroom facilities. The restaurant, which prides itself on the use of fresh local produce, offers an interesting and varied menu.